The change in direction of an alternating current can be observed in a circuit with a alternative generator, two LEDs connected in parallel and opposite directions and a resistor to protect the LED. 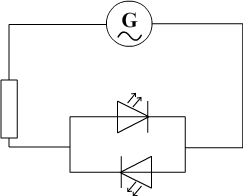 We observe in this circuit that one of the diodes shine while the other remains off.
Regularly the situation is reversed: the LED that shone goes off while the other LED lights up.

The two LEDs are connected in opposite directions and when one is in the direction from the other is blocking. When the current direction is reversed the blocking LED allows current to flow and the one that was in the forward direction becomes blocking.

Comment:
- When changes of direction are too fast, the blinkings are no longer perceptible to the human eye and LEDs seem to shine continuously.
- The small wave below the symbol of the generator is the symbol for an alternative quantity.