Shadows, lunar eclipses and phases of the moon


1) What is a shadow ? When an opaque object is lighted, some areas, located behind the object, don't receive light and form the shadow of the object.

2) Core shadow and cast shadow When an opaque object is lighted, two kind of shadows can be distinguished:
- The core shadow is the part of the object that doesn't receive light. This part is at the opposite side of the light source.
- The cast shadow consist of
- The core shadow is located on a surface behind the object (screen, wall, floor etc.) that doesn't receive light. This shadow has a shape that reproduces contours of the lighted object. As for the space between core shadow and cast shadow, it can be called " cone shadow ".

Example: a sphere lighted by a tiny light source 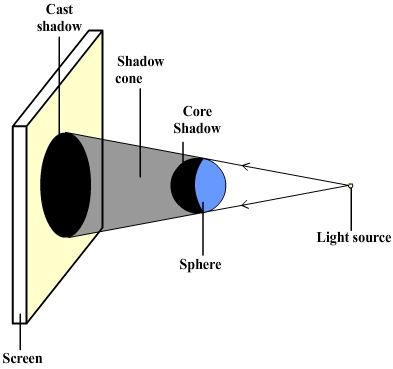